Congratulations on your investment in Needlepoint Bipolar Ionization (NPBI™)! You’ve ensured your community is now a safer place for seniors to reside, staff to care and anyone to visit. Thank you. Not everyone in Senior Living can say that. We want to help you tell the story of your commitment to put Safety First and prevent the spread of infectious disease. 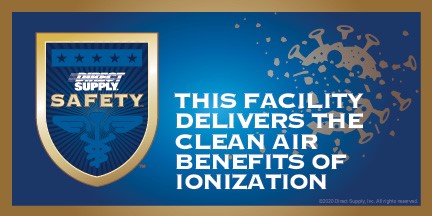 Fill out the form to order more

When co-branding pieces, please ensure that the Direct Supply logos are at the same level and is the same size as your logo. When noting Direct Supply®, Direct Supply® Safety™ or Direct Supply® TELS® in copy, include proper registered and trademark symbols as noted above. If using the SARS-CoV-2 claims, you can not deviate from copy and you must use the disclaimer in its entirety.

Fill out the form and let us know: What’s the #1 benefit of having NPBI installed in your community? All responses are confidential. However, a Direct Supply representative may reach out to you seeking permission to use your response to share the benefits of NPBI with other Senior Living organizations.

How does it work?

Global Plasma Solutions’ (GPS®) patented NPBI technology uses an electric charge to create a plasma field filled with a high concentration of positive and negative ions, which has been shown to be more effective than monopolar systems that emit only negative or positive ions. As these ions travel with the air stream they attach to pathogens, particles and gas molecules. The ions produced travel within the air stream into the occupied spaces of a building, cleaning the air everywhere the ions travel.

Two thorough metastudies have assessed the safety of ionization. “Air ions and respiratory function outcomes: a comprehensive review’ concludes the reviewed human experimental studies ‘do not indicate a significant detrimental effect of exposure to positive air ions on respiratory measures. Exposure to negative or positive air ions does not appear to play an appreciable role in respiratory function.” Another comprehensive review, “Negative Air Ions and Their Effects on Human Health and Air Quality Improvement’ found ‘no data showed the harmful effect of negative air ions on humans/animals.”

Moreover, in contrast to older forms of bipolar ionization, usually referred to as corona discharge systems, Needlepoint Bipolar Ionization was specifically engineered not to produce ozone. ASHRAE recommends keeping ozone levels beneath 10 ppb and warns that some ionization technologies can create ozone, which is known to be harmful. GPS has passed the extremely stringent UL 2998 certification, which requires products to not produce ozone at levels higher than 5 ppb (0.005 ppm).

What testing has GPS done?

To establish the effectiveness of NPBI, GPS partnered with several third-party labs, including EMSL, ALG, and Innovative Bioanalysis. Most GPS testing has been conducted at an ionization level of 1,500 ions per cubic centimeter, which is similar to what will be found in occupied spaces inside buildings where NPBI technology has been properly installed. All tests are conducted against a control group, so comparisons can be made between the natural rate of decay for any pathogen and the improvements stemming from ionization. We’re happy to share the results of any of these tests.

What impact does NPBI have on surfaces?

NPBI is an air cleaner that has some impact on surfaces, but it is not a surface disinfectant. Anyone considering installing NPBI should not be buying it with the intention of changing their surface disinfection and cleaning processes.

Is NPBI new? Has it been installed in many places?

How will NPBI impact the performance of my HVAC system?

NPBI will improve the performance of your HVAC system by keeping coils and ductwork cleaner and free from growth. Plus, NPBI improves the effectiveness of the filters you are already using, including a four- to five-fold increase in the efficiency of a filter when challenged with viable bacteria. NPBI has been tested by a third party lab, which concluded MERV 8 filters plus GPS were as effective as MERV 13 filters at removing smoke particles.

Should I change my infection prevention and control processes after I install NPBI?

No, you should not change your infection prevention and control processes. NPBI will enhance your current practices and make your HVAC system even more efficient at removing pathogens, plus it even makes the masks used as PPE more effective. It is important to continue to comply with all applicable public health laws and guidelines issued by federal, state, and local governments.

How can I be sure it works?

Global Plasma Solutions has many tests, some in lab settings and some in field settings. There’s a good overview here, and more in their resource library, which has research, case studies, and more. They have good before and after research on particles, odors, and pathogen reduction.

Are there real world examples of how effective it is?

GPS’s lab tests prove this technology kills pathogens, but they have field tests as well:

Over the last 15 years GPS has 250,000+ satisfied installations, including many in hospitals or other healthcare settings.

How will we measure whether or not it’s working?

You can directly measure the number of ions being emitted using a handheld monitor. After installation, we will send a technician to the site to confirm products were installed properly and that your building is achieving proper levels of ionization. For pathogens, the surveillance tracking your Infection Preventionist is already doing may allow you to see a reduction in incidents and outbreaks relative to the base rate for various infections in your buildings. Direct testing for the presence of pathogens is possible as well.

How does the cost of NPBI compare to other air purification technologies?